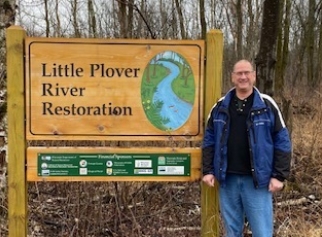 The deterioration of the Little Plover River, a class 1 trout stream, was on the Federation’s radar long before the dry-up resulting in a large fish kill in 2005.  A stakeholders committee assembled to mount a voluntary effort to restore the Little Plover River.  UWSP intensified their flow-monitoring while other first-aid strategies were implemented.  This included establishing a Public Rights Stage and labeling the Little Plover’s five-mile watershed as one of the Nation’s Most Endangered Rivers, like the Boundary Waters and the Colorado River.

This effort went on for more than a decade when Dan Mahoney, Village of Plover Administrator, decided to go in a little different direction.  Dan hired Hydrologist Jeff Nania to research the watershed.  Jeff’s report directed attention to the area East of Kennedy Avenue; and the origin of the LPR.  Next up was the creation of a Village of Plover Task Force which included village departments, the DNR, the Wisconsin Wetlands Association, Erin & Associates, as well as contributions and input from WWF.

Dan was the point guy who kept everything organized and flowing throughout the process of securing $2.6 million for a two-year program known as the Little Plover River Habitat Restoration Project.  These monies were pieced together from many different government agencies, foundations, and philanthropists.  The bureaucratic nature of the applications process required a lot of extra time and effort by Dan. He also provided a lot of field input.

Village Administrator Dan Mahoney has demonstrated incredible ability to coordinate day-to-day aspects of many projects while keeping an eye on all the pieces.  His success in dealing with the Little Plover improvements has created interest from growers and landowners on nearby streams like the 14-Mile, the Isherwood Lateral and the Mill Creek.  Nominator Jerry Knuth concluded, “Hats off to Dan Mahoney for a job well-done and worthy of being WWF’s Land & Water Conservationist of the Year.